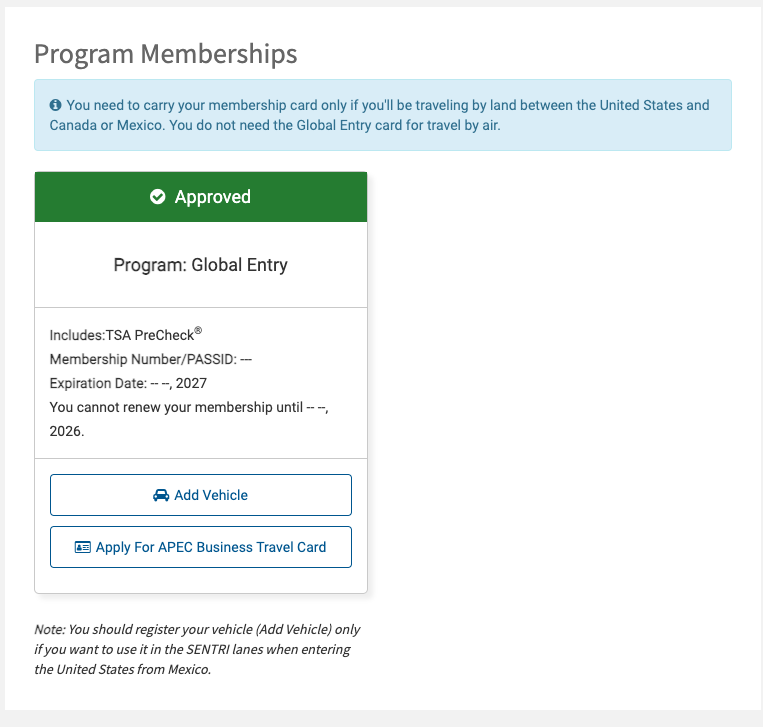 After the pandemic, with travel surging, the estimated application wait times for Global Entry has become less certain than before. As I recently went through the application process myself, I hope my experience will be a helpful data point.

The stages of the application process

There are essentially three stages:

Waiting for conditional approval is usually what takes the longest and you have least control over this stage. Scheduling an enrollment interview can be tedious, but you can instead do what’s called Enrollment on Arrival (EoA), where you do the enrollment interview immediately after clearing customs and immigration at an airport upon return from a foreign country.

How the process started for me

I applied in mid-November 2021 after I got approved for my Amex Platinum and it gave me a Global Entry application credit. From what I had read online, it could take anywhere between 24 hours to 12+ months to get “conditionally approved”, with the average wait time being about 1-6 months. I was hoping for a quick approval, since I had no criminal records, but unfortunately that’s not how it works. This way, I could use Global Entry upon returning to the U.S. from Europe in late March 2022. Instead, I had to wait until early March of 2022 for my approval.

I kept checking my application portal for status updates, but as I later learned, this was a waste of time and more anxiety-inducing than necessary.

Why did it take this long for my conditional approval?

From a perspective of completing a background check, the following factors may have influenced the time it took for my conditional approval to be issued:

It doesn’t take that long to get background checks from four counties across two states and then reconcile them (at least, it really ought not to!), but I suspect the travels to China and the UAE may have caused flags to be raised for further review. That’s fair, considering China is not on the best of terms with the U.S. right now, and traveling to the Middle East may raise alarm due to terrorist threats eminating from the region. To be honest, I am fine about vetting me for trustworthiness; I wouldn’t want anyone communicating with terrorists or committing espionage to be a member of Global Entry.

I got an email with an application status update in early March, saying my application had been conditionally approved and the next step was enrollment. This is where I would have an interview with a CBP agent. Because I got this message when I was in Europe, the choice was obvious for me: rather than trying to book an appointment several months out, I’d simply elect to enroll upon arrival. As long as I was clearing customs at a reasonable time of day (my flight landed in mid-afternoon in Dallas), I could reasonably expect Enrollment on Arrival to be available.

When landing in Dallas, the instructions were unclear on how I was to enroll upon arrival. Should I skip the regular immigration interview and ask to go to somewhere special to both clear immigration and enroll at the same time? I ended up asking staff and CBP agents at every step of the way. When passing through regular immigration (hopefully for the last time ever), I asked the agent where I could complete enrollment—he told me to ask after I had collected my bags. After collecting my bags, I asked the customs agents (the last people you’d talk to before you’d be “released” into the U.S.) and they took me to the secondary inspection area, where nobody was there except the secondary processing agent.

The interview process was very pleasant. The agent asked me where I worked (to confirm the information I typed into the application), if I had a criminal record, and then took my fingerprints. We even joked about the high cost of living in Seattle. (In my opinion, this interview should not be stressful at all. As long as you are telling the truth, it should be very easy to work with the agent, and if you are friendly with them (and if you’re like me and like to crack appropriate jokes), you can even relate to them and it makes the process better for both you and the agent. After all, they are human too!) At the end of the interview, she told me straight up that my application has been approved and that I would be receiving my card in the mail in 2-3 working days. Sweet!

Sure enough, I did receive my card in 2 working days in the mail, which was a surprisingly fast turnaround for a government agency that had taken 4 months with granting me conditional approval. My interview was on a Thursday and I got it on the following Monday. I immediately activated it online so I could use it at land crossings. (Read about my land crossing experience with Global Entry on this post: My experience using Global Entry for the first time by land.)